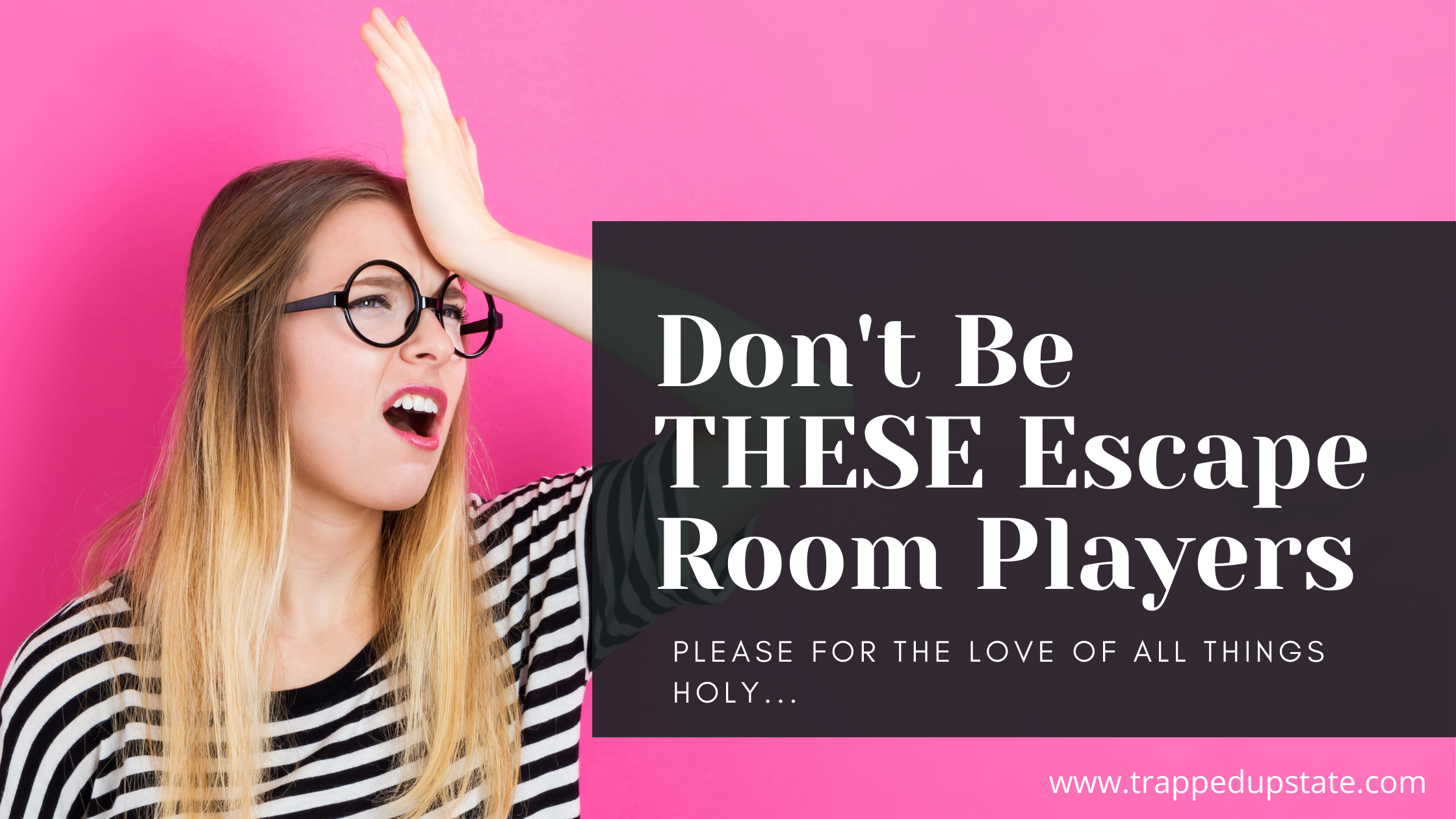 We’ve written about escape room tips and tricks to help you be successful when playing escape room games. But this post is about what NOT to do in an escape room. After watching different teams with different types of players, we compiled a list of the type of players that make a team LESS likely to escape. If you end up on a team with these guys, don’t let them throw you off course! And please, for the love of all things holy, don’t BE these players!

Debbie Distractor is the player who takes players who are on track, and re-directs them to a completely illogical and/or irrelevant direction. She will do things like: suggest the team work on anything other than what the gamemaster JUST gave a clue about, draw attention to puzzles that you clearly don’t have all the pieces to, or tell everyone to abandon their entire logic because one number is off on a code.

Nora Non-Communicator saunters around the room without speaking. She may quietly solve puzzles, leaving the rest of the team wondering how they got that key or clue. Nora may notice a vital detail, needed to solve the next part of the game, but fail to mention it until someone else finally wastes 5 minutes figuring it out. Inevitably, you’ll hear her say “I saw that, I just didn’t say anything.” You can’t be a lone ranger in escape rooms if you want to actually escape.

There always seems to be one player who becomes more and more anxious as time ticks away. Panicking Penny is HYPERAWARE of the time elapsed and makes it her mission to make sure all other players are as on edge as she is. Penny may start yelling at everyone during the final puzzle, or when the group opens a new room with only 3 minutes left on the clock. Remember, Penny, you’re not actually locked in. And you probably want to still have friends when you leave. Stay calm.

She comes up with logic that would make our games impossible if they were actually designed that way.

As a gamemaster, I’m never really sure if Statue Stan actually wants to be there. Stan spends 90% of the hour standing in one place, staring around the room. He does not move. He does not speak. He simply is. Statue Stan gradually becomes a fixture in the room, as players maneuver around him for 60 minutes. Every once in a while, Stan will show up to do some menial task the other players don’t want to mess with. And he usually has at least 1 game-changing revelation that keeps his family and friends bringing him along. Is he having fun? We may never know.

Guessing Gilbert is that player that just randomly, with no logic or reason, starts trying to guess all of the lock combinations without having to actually play the game or solve any puzzles. Gilbert has envisioned himself as a master lock picker and yes, although there are literally 10,000 different potential combinations for that four digit lock, he is certain that he can crack the code, if he tries hard and believes in himself.

While Gilbert may eventually be able to guess a combination by trial and error, it kind of takes the fun out of the game, no? You and Gilbert will probably have a little more fun if you know why the code was 4903, even if it costs you a couple extra minutes and a possible clue from your gamemaster.

Player: “It’s been 20 minutes since we solved anything, maybe we should ask for a clue?”

Gamemaster: Please ask for a clue before you get further down this rabbit hole. Please.

Stubborn Steven is the player who REFUSES to ask for clues, even when the logic starts to get further and further away from…well…actual logic. Hey, we get it, we like to use clues sparingly too, but not asking for a clue will oftentimes get your group more and more confused as you try to make sense of something that isn’t making sense. At Trapped our clues are unlimited, so just ask if you’re on the right track. Unless, of course, solving the puzzles on your own is more important than completing the room, which is totally fine too. If you don’t finish, you can always come back and try again!

How to Be a Helpful Player

If you want to be an asset to your team members, don’t be these guys!

Above all, HAVE FUN! Escape rooms are supposed to be fun, no matter what kind of player you are. Happy escaping!