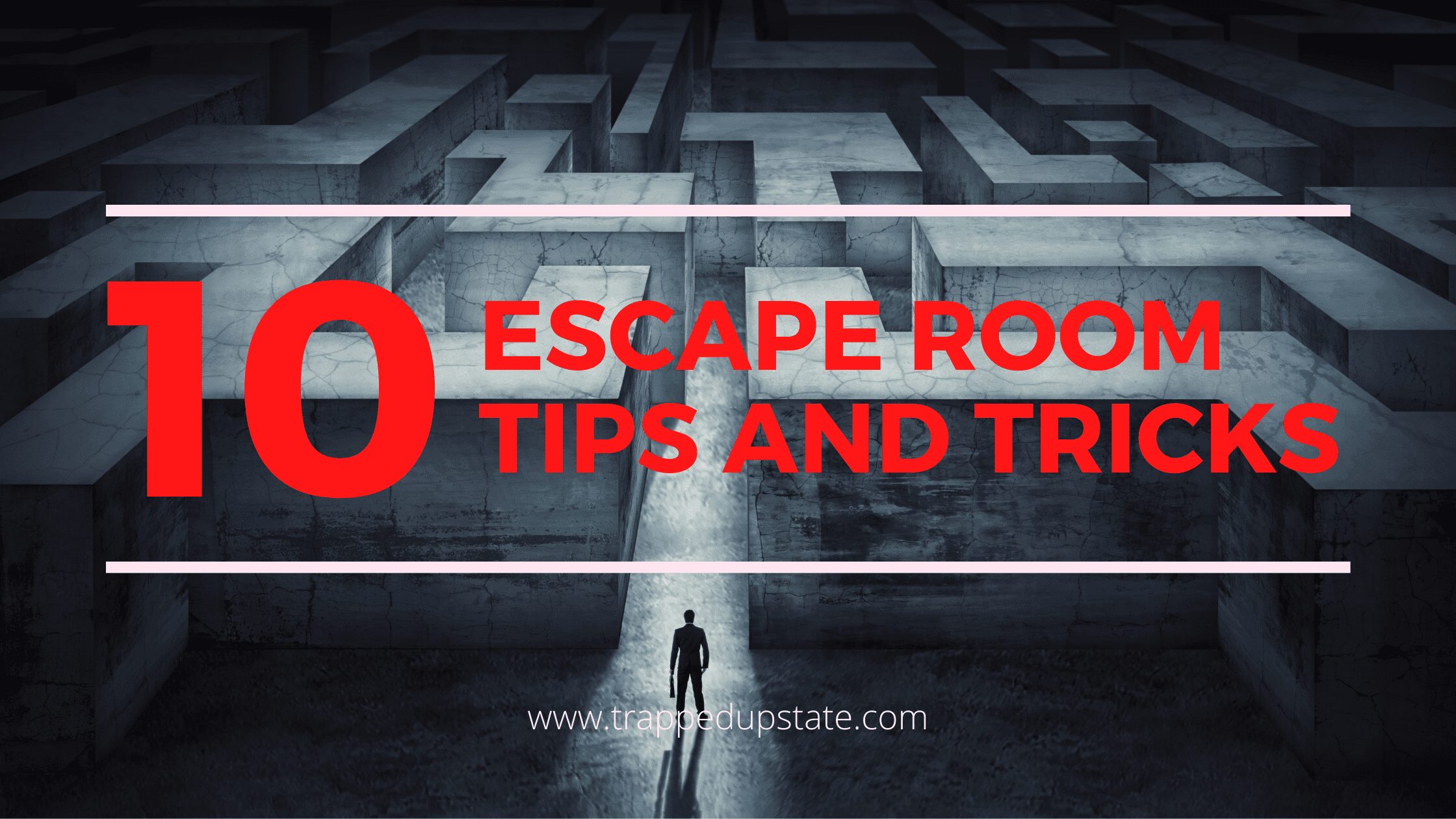 While escape room games may seem intimidating to some due to their secretive nature, at the end of the day, they are games–and games can be won. The first escape room I ever played was very difficult for me because I didn’t know what to expect or what to look for right away. This left me with a lot of wasted time and energy when I could have been more strategic in my approach. So we have decided to share some escape room tips with our readers and customers!

Today’s post compiles some of the lessons that we’ve learned while playing many escape rooms across the East coast. Some simple advice may help you use your 60 minutes wisely during your next escape adventure!

If you are a new player, you may not know what to expect when you gather your team together to tackle an escape room. But veteran players will advise you to make some decisions before you even walk in the room. Delegation can save time and energy and can be the most effective way to use everyone’s talents. Escape room “jobs” can include:

In addition, you’ll probably learn over time that some people are naturally better at some tasks and puzzles than others. I happen to have a really good memory, so I can remember things from a previous room or something I’ve seen before when we need to use it later. Mark is good at schematics and diagrams, even when they don’t make any sense to me. Ben and Lily are good at noticing things on walls or in pictures that seem out of place. Think about these skills in advance and how you can best use them all effectively.

One of the biggest mistakes that we make while playing rooms (and we kick ourselves every time) is not doing enough physical searching. It’s easy to overlook a key that’s right in front of your face. Pay special attention to complicated fixtures such as chains, fancy light fixtures, removable objects on the walls, etc. In addition, make sure you check the walls high and low. We’ve missed light switches and buttons that were hiding in plain sight because we thought they were outlet covers or other fixtures that were off limits.

Most escape rooms will have a clear indicator of what items are not to be touched. If you’re unsure, just ask your gamemaster if you are allowed to touch or move an object.

When you go to play an escape room, your game master will likely remind you to communicate with your teammates. Whether there are 2 or 10 people on your team matters less than how effectively you communicate with one another. In an escape room, you want to think “out loud”. Verbalize any thoughts, ideas, observations, and talk about what you see. For example, “I see a 5 digit letter lock,” or “There is a tiny lock on this cabinet over here,” will go a long way when your teammates find a clue.

In addition, some rooms feature puzzles where players have to be in two different places at once to solve it. Calling out observations from room to room will assure that your team doesn’t miss a puzzle or clue.

4. Pay attention to colors and patterns.

The first clue I missed as a rookie player was not knowing to pay attention to patterns and colors. If you see different colors in one place (for example, bottles that are each a different color), pay attention to where you see those colors in another part of the room. Numbers are also important in escape rooms. If the numbers are 1-4 or 1-5, it likely means the puzzle is giving you an order to do things. If they are higher numbers, like 5-9, it probably indicates the code to a lock or keypad.

5. Remember, you will not need any outside knowledge for most games.

Fear of looking stupid is one of the reasons people cite for avoiding escape rooms. Believing you have to be super smart to solve an escape room is a major misconception. The vast majority of escape room games do not require outside or prior knowledge, and it’s easy to forget that when you run across a chess board, riddle, switchboard, or Morse Code machine. Don’t waste your time trying to figure out a puzzle like this if you don’t have a key or diagram. If you don’t have it yet, it’s probably coming later in the game. It’s tempting to try to dig in the depths of your brain to remember where the rook goes on a chess board, but it’s not necessary. Don’t fret if you don’t have all of the information right away. In fact, that leads into the next tip…

6. Don’t waste too much time on something that doesn’t make sense.

I will admit it. This tip is for me. I am ALWAYS the one who will freak out over a puzzle that doesn’t have all the pieces yet. I am also the one who gets thrown off on red herrings (hence, why we don’t use them in our games). Rule of thumb…if it’s really not making any sense to you, put it down and come back to it. It is possible you don’t have everything you need to solve this puzzle. It is only when you are totally stumped with all of your clues that you might want to go back and revisit it (or ask your handy gamemaster for a hint!).

On another note, don’t be afraid to “pass the baton” to someone else on your team. There are naturally puzzles that I am good at, and there are others Mark is good at. Some of them are more easily solved by Ben and Lily (10 and 8 years old). Different minds process clues and puzzles differently. Don’t be afraid to use your unique gifts!

This one comes with a learning curve. It is VERY easy to gather around one person solving a clue and forget to spread out around the room and continue to look. It’s also ok to try something that someone else has already tried. We once wasted a good 10-15 minutes in a room because Mark had assumed that I tried something on a puzzle because I had talked about it, when in fact I had tried something else (we’re looking at you, Backstage Escape Rooms). If a puzzle doesn’t actually require two or more people to solve it, you should be out looking for other puzzles and items in the room.

Remind any kids of this in the group too. Ben and Lily are notorious for crowding around us just watching!

In most (not all) escape room games, you’re only going to use an object one time. Items are also usually always there for a reason. If you have an object or clue that you have not used, don’t forget about it! You probably want to carry it between rooms and you want to check back with it regularly. On the same note, you’ll want to make a discard pile for items that you’ve already used. It’s easy to leave things around the room for someone else to pick up and think “have we used this yet?” Being organized and keeping used objects away from unused objects can save you a lot of time in the long run.

Just like knowing that most objects serve a purpose, it is just important to know what objects probably do NOT need to be messed with. Those items include things like ceiling tiles and power outlets. This can be tricky, as there are also items like vent grates, light switches, and plug in fans that we’ve seen used as clues. The main thing to remember is that you will NOT need to disassemble the room. Most gamemasters will explain not to use excessive force (more than a 5 year old’s strength) in the room, but just remember that most escape room owners want to reduce liability and don’t want to risk a customer getting electrocuted or falling from a ladder or ceiling. So we aren’t putting clues there!

Remember, escape rooms are games and they are meant to be fun, not frustrating! As a very competitive couple, Mark and I have gotten frustrated with the game and with each other on more than one escape room date nights. We now have a conversation before each game with reminders for the game and also reminders to each other that it’s just a game. While we want everyone to have a good time, it’s important to remember that a timed game with a bit of mental pressure can cause stress, so be gentle with one another. Whether you beat the clock or not matters far less than connecting with your team and celebrating the successes that you DID have during the experience.

Enjoy your game and a chance to journey to a new world for 60 minutes!